Baptism of Fire is the first mission in Commandos: Behind Enemy Lines.

Norway. February, 1941. Since the retreat from Narvik in June last year, Norway has remained under German occupation. The Luftwaffe has established important airfields at Trondheim, Herdla and Stavanger. These put the whole North Sea in range of the German bombers.

Objectives: The first mission of your unit will be to attack a poorly defended relay station at Sola, as a part of an incursion near the Stavanger airfield. This will block radio communications for some hours, which will delay German reinforcements. Colonel Montague Smith will be briefing you from now on.

Tactical Advice: Welcome to Norway, officer. Let's get to the point. I want the relay station in this small island knocked down. The first problem is, your three men have landed at different points: the green beret, the driver, and the marine. First, establish a meeting point and make each man get there. At that point, the marine will take them across to the island. Capture some kind of boat for that purpose. Once there, find a way to blow up the station. There are some fuel barrels that can be useful. The green beret can handle them. That's all. Ah, officer... I understand this will be your first mission in enemy territory. Please be careful. There is a real enemy out there. Thank you. 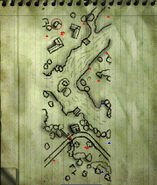