Commandos: Behind Enemy Lines is a real-time tactics game developed by Pyro Studios set in wartime Europe and North Africa. The game consists of 20 levels of increasing difficulty in which the player must control a number of individual commandos to complete various objectives. Additionally each level has a unique password so that the player can return and replay any completed level later.

There are 20 missions in total in Commandos: Behind Enemy Lines. The missions names are different between American and European copies of the game. The first one is the name in the European version, and the second one after the slash is the mission's name in American version, if it is different.

There are some important issues with Commandos: Behind Enemy Lines. Due to it's age most modern PCs will run the game impossibly quickly making it difficult to play but both Steam and GoG.com version have been patched.

See the article here: Fixing Commandos for solutions to make the game playable. 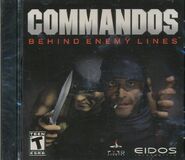 Another version of the game's boxart features a German soldier that resembles Thomas Hancock.

Installation splash screen for the game features McRae (The Pilot) which is not a part of the team, but is an ally in one mission.

This article is a stub. You can help the Commandos Wiki by expanding it.