Commandos: Strike Force is a first-person shooter computer game and the fifth installment critically acclaimed Commandos series. It is developed by Pyro Studios and published by Eidos Interactive.

Released during the first months of 2006, the game makes a departure from the first three games. Although the missions are set-up in a similar fashion (several different objectives, some to be achieved through stealth, others through use of force) and in most occasions the player is allowed to change between different characters, this is the first game in the series to apply a first-person perspective, like many other World War II inspired games, in contrast to the overhead view of the earlier games. Hence, the game is far more similar to the Medal of Honor or Call of Duty games than to earlier entries of the series. The game introduces new weaponry including shotgun, grenade launcher, light machineguns and a dual-akimbo mode (only for the Green Beret).

The game attracted an overwhelmingly negative reaction, especially from those coming from fans of the earlier games in the series who see this a massive departure mainly due to the trademark difficulty instead giving way to a game that is much less so. Similarly, it was promoted as mixing elements of strategy from the past games with traditional first-person shooter gameplay but instead only hinted them and whilst being predominantly action orientated. As a result, both critics and fans felt it did little to distance itself from the recent flood of similar games. 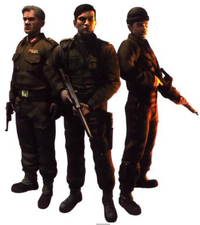