Sir Francis T. Woolridge (born 21 March, 1909 in Sheffield, England), a.k.a the Sniper or Duke is a descendant from a noble family. In 1936, he won a gold medal in shooting in the Berlin Olympics. In 1937 he enlisted in the army and between 1937 and 1939, he was stationed in India, where he was recognised as an outstanding marksman. In 1940 he joined the Commandos. He was awarded a military medal when he killed the Commandant of the German garrison in Narvik with a single shot from a distance of more than a mile. He is considered one of the best snipers in the world. His prefered weapon is the Springfield rifle .

The Sniper is very calm and calculated behind the scope but also unfriendly with his companions.

The Sniper has a limited amount of ammunition per level and so he will very rarely waste a bullet. His missions usually involve quietly clearing the path of enemy combatants for his colleagues from a distance. He will then stand behind debris or other objects which provide him safety while he provides cover for the Commandos. He can also climb poles and position himself to snipe at the enemy. The Sniper is the team's medic if the Driver is not available. 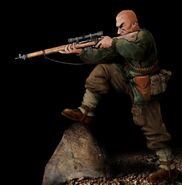