Rene Duchamp is one of the playable Commandos.

Rene Duchamp (born 20 November, 1911 in Lyon, France ), also known as the Spy or Spooky joined the French Secret Service in 1934 and between 1935 and 1938 was the Chief of Security at the French Embassy in Berlin. After the German invasion in 1940 he joined the Resistance. Soon after he was contacted by the Commando corps about becoming a part time member. Since then he has collaborated frequently with them in special operations, participating in numerous sabotages and responsible for the destruction of at least three trains, fourteen tanks and over fifty land vehicles. His information about the German troops is essential for the British Secret Service.

Rene has amiable character and is great at making conversation. He harbours a feeling of absolute hatred towards the Nazis. The skills he learned while he was in the Secret Service have made him expert in communications and techniques of infiltration and sabotage and has a natural instinct for imitation which probrably earned him his other nickname "Spooky". Beside speaking French he can speak English, German, Russian, and Italian fluently.

Being fluent in five languages allows him to infiltrate enemy lines wearing a stolen enemy uniform and divert or give deceptive orders to enemy soldiers. His attack involves silent and cautious movement and he attempts to use minimum force if possible.

The Spy is a critical character whenever available and should get into uniform as soon as possible. His ability to distract enemy soldiers, kill isolated foes, and carry their bodies is incredibly powerful, especially in concert with another commando or two - such as the Green Beret.

If the Driver is not present in each mission in Behind Enemy Lines, The Spy can also drive any vehicle as long as he is in uniform. This feature is only available in the mission Stop Wildfire. The Spy is the team's medic when neither the Driver nor the Sniper are deployed on the mission.

He has the ability to wear an enemy uniform for an infinite amount of time, or until a soldier of a high ranking sees through his guise. His preferred weapon is a syringe loaded with a lethal poison which eliminates his enemies in complete silence. He can lift bodies and hide them to avoid raising the alarm.

The Spy appears in all missions minus Saving Private Smith and the Pacific theater missions. 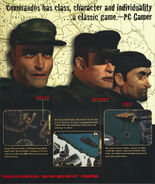 A beta Spy image that appears in the Windows cover.