Willys MB is an army jeep that appears in Commandos: Behind Enemy Lines and Commandos 2: Men of Courage. It first appeared in the mission Pyrotechnics which can use as an automatic escape vehicle, but cannot be controlled by the player. It also appears in the tutorial mission in Commandos: Beyond the Call of Duty which is a part of a scenary and it's not enterable and controllable.

However, it later become playable in Commandos 2: Men of Courage which appears as the one from the previous games, but it can be driven by any of the Commandos rather than a Driver alone. It only appears in the final mission Is Paris Burning? and one of the bonus missions. 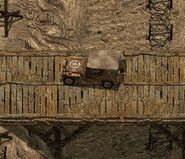 Appearance in Commandos: Behind Enemy Lines.

A Willys MB decoration in Commandos: Beyond the Call of Duty which is still non-playable.

A Willys MB jeep in the Driver's photo with a built-in machine gun on it.
Community content is available under CC-BY-SA unless otherwise noted.
Advertisement